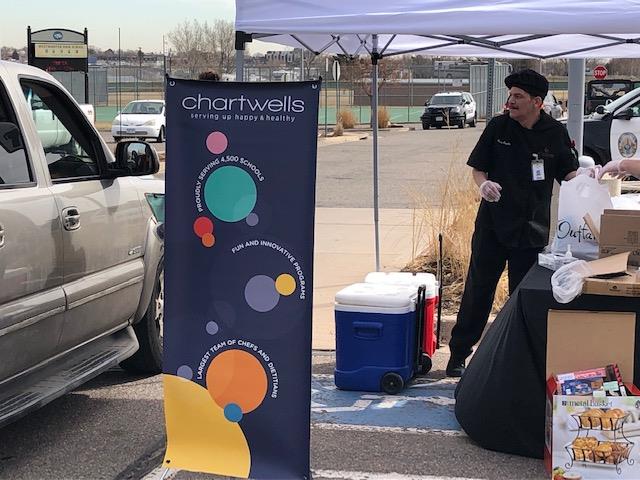 According to a “Chalkbeat” analysis of emergency food distribution programs during the COVID-19 pandemic, Westminster Public Schools is one of the few districts to find a way to deliver more meals to families during the ongoing crisis than during a typical school year.

The report, also published in the Denver Post, Why Colorado school districts are serving fewer meals during the COVID-19 closures concludes:

”Districts have been unable to approach pre-pandemic meal counts for a range of reasons, including confusion over the rules, lack of transportation, and narrow pickup windows that don’t meet the needs of harried parents.”

The report adds, “The districts that have bucked this trend, like Westminster Public Schools, have done so by leveraging strong community networks and ramping up delivery options.”

According to the report, which included several pictures from WPS distributions sites, the district is providing 125% the number of meals it did when schools were in session. Surrounding districts like Denver, Jefferson County, Aurora and Adams 12 Five Stars Schools were well below normal levels.

Realizing that not all families had transportation to get to the four original distribution sites (Westminster High School, Scott Carpenter Middle School, Ranum Middle School and Shaw Heights Middle School), WPS thought outside the box to use district busses and bus drivers to bring food into neighborhoods.

“The district has taken the position that they want to feed all the kids they can,” David Maki, Director of Culinary Service for Chartwells told “Chalkbeat”.

In the coming weeks, Chartwells will transition to its traditional summer meal program, but those details are still being finalized. They will be shared with the public when they are finalized.