“I don’t do this by myself,” he said after being notified that he had been selected for the annual award. “The guys at the warehouse, for example, make it possible for students to have instruments.  It’s everybody.”

Linert received his award on Thursday, October 20, at breakfast at the Westminster Westin Hotel. Appropriately, the Westminster High School choir was on hand to sing the National Anthem. He also invited two of his students to sit at the table with him. 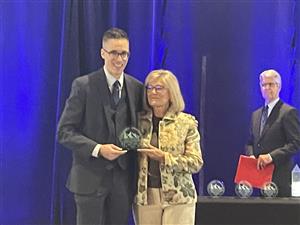 As a boy, Linert says his parents encouraged him and his older brother to play music. He says that early on, he decided that not only did he want to become a great musician (he accomplished that), but he would also like to teach music.

You can learn more about Michael here.