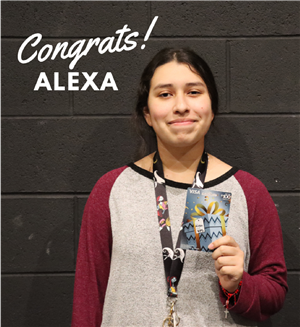 Last month’s District Showcase was an incredible success, with hundreds of families attending to learn about all we offer at Westminster Public Schools.

As families entered Westminster High School, they were given a printed passport showing career technical pathways, extra-curricular activities, and athletic and arts programs along with their school. As students visited each table, they received a stamp on the corresponding square of their passport. This encourages families to explore different areas and make discoveries. At the night's end, the passports were turned in to be entered in a drawing for $100.

Last week, volunteer students randomly pulled one of those names from a bag to reveal the winner- Alexa J. Ramirez, a freshman at WHS. We reached out to Alexa’s mom to learn a little more about her daughter and their impressions of the district showcase.

“At first, we thought maybe the event was only for younger kids, but we decided to go and see for ourselves,” explained Yadira. The family was intrigued by the passport challenge and began searching out the tables for each category- which took them down to the garden level to watch demonstrations of construction by CTE students. “I shook the girl’s hand, and it was the hand of a hard worker. I joked with my husband "This girl does more work than you!”

Alexa and her family also visited the Centerstage Theatre, where teacher Dustin Edwards showed them what an actual theater production looks like. Said Edwards, “It’s tough to demonstrate in daytime classes what theatre is to students who haven’t seen a play before. The District Showcase was a great way to invite people into the process.”

After moving Alexa from a private school in Denver several years ago, Yadira feels confident that Westminster Public Schools is the right fit for her daughter. “There are so many programs, so many opportunities, and so much support for students to succeed.”