Visitors to the Westminster Station Park Nature Playground will see a permanent reminder of how Colorado STEM Academy provided help with the park’s design and creation. A block of three large boulders gives “Special Recognition” to the students who contributed their ideas.

The $7 million park, built on five acres of land near the Westminster Station Park opened on Saturday, November 6 with hundreds of residents turning out to see it.

In 2017, during the initial design stage, city planners collaborated with three sixth grade classes at Colorado STEM Academy to get the opinion of kids who obviously know what makes for a good park.

“This project had a lasting impact on my students as many of them still (as 11th graders), talk about the time we helped design a park,” said Jessica Sullivan a sixth-grade teacher at Colorado STEM Academy. “I hope the community sees the new park as a place to experience nature and come together. I know the kids and families at Colorado STEM Academy are eager to have such an amazing play area just blocks away from the school.”

The park was made possible in part by generous grants from Adams County Open Space, Great Outdoors Colorado, the Colorado Lottery and Westminster Legacy Foundation.

You can learn more about the park and its construction here. 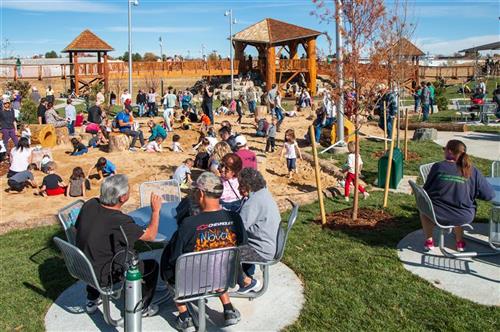 (courtesy of City of Westminster)