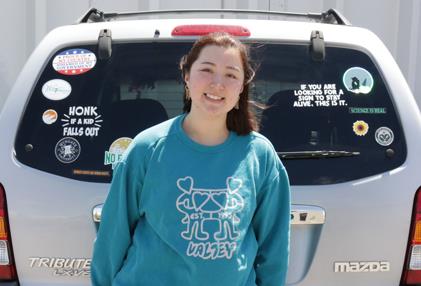 The first thing you notice about Kira is her openness. She smiles easily and talks freely about her struggles over the past two years, including an abusive relationship, a serious car accident, a best friend lost to suicide, a drug overdose, an eating disorder and a sexual assault by a trusted co-worker. Given such extreme circumstances, it’s easy to see why Kira almost gave up. She couldn’t imagine a future for herself. She knew she was smart, but finishing high school seemed like an impossibility.

After the schools she attended failed to address her needs, Kira was finally sent to Cascade Canyon, a residential treatment center designed specifically for teens to learn healthy ways to handle the daily challenges of their lives. Nestled in the mountains near Pikes Peak, Kira went on hikes under waterfalls and engaged in hours of therapy each day. Something finally clicked and when her mom suggested enrolling at Hidden Lake High School, she faced this new challenge with optimism and grit.

“She is such an amazing kid and I was lucky to have her in my class,” said Hidden Lake social studies teacher, Douglas Kurzawski. “Kira was a student who came to HLHS and exemplified what our school is about. She is so passionate about different topics and would always be willing to speak up during our Civics class.”

Speaking up about what matters to her seems to come naturally. In fact, her creative writing entry for Celebrating Excellence! even won her the grand prize and an Oculus Prime headset. After an assignment in which Kira wrote a letter to Congressman Ed Perlmutter about the opioid crisis, she had the opportunity to meet the veteran politician who promptly encouraged her to run for office.

Kira is indeed interested in helping people in her community, but through medicine as opposed to public service. After graduating early this year, Kira is getting ready to head off to Wingate University in North Carolina to study pre-med with the help of a significant scholarship. She is eager to get back to the East Coast, to the landscape and culture she grew up in.

In addition to her studies, Kira also teaches dance classes to children through Westminster Parks and Recreation and works a part-time job. With the earnings she has saved, Kira bought herself a car, a Mazda Tribute, which is her pride and joy. Bearing a bumper sticker that says “If you’re looking for a sign to stay alive, this is it,” she even named the car for her best friend who died by suicide- Joey. We can’t wait to see what the future holds for this remarkable young graduate from Hidden Lake High School!